This chart shows the development of the house price-to-disposable income ratio for several countries, with the long term average set as 100. Ireland had the biggest housing bubble (in terms of prices to income). Spain was really close to Ireland and the ratio is still higher for Spain, while Ireland already got back to its long term average.

Especially notice the Netherlands, which is still really high on the scale and France, which is rising again after the decline. Also notice the United States which, according to this measure, should not have a housing bubble anymore. 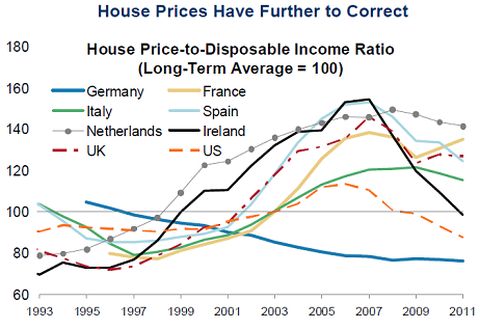 Posted by Reinoud Linschoten at 9:35 AM