Countries With Biggest Pension Assets As a Percentage of GDP 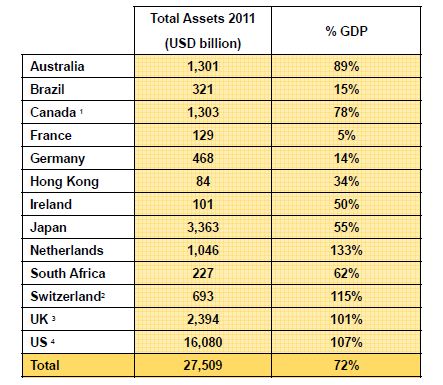 For future retirees these assets can ofcourse grow larger given some return if these assets are invested. The next graph shows the allocation of the assets for the 7 countries that had the biggest pension assets in 2011. On average (world) these countries had their assets invested for 41% in equity, 37% in bonds, 20% in other and 2 percent they held in cash. The Anglo-Saxon countries had relatively more invested in equity compared to Japan, Netherlands and Switzerland. The Netherlands and Japan held a relatively high share of the assets in bonds, while Switzerland held a relatively high share in other.

Posted by Reinoud Linschoten at 1:51 AM