Number Of Times Euro Zone Countries Have Broken The SGP

This graph from the Dutch 2012 budget which has been presented yesterday by the finance minister shows an interesting insight in the number times countries have violated the Stability And Growth Pact. The Stability and Growth Pact says that countries in the Euro Zone can have a budget deficit of at max 3 percent and a maximum government debt of 60 percent. Greece has, as you might have guessed broken the SGP the most times, but Ireland and Spain are, maybe surprisingly, clear winners. 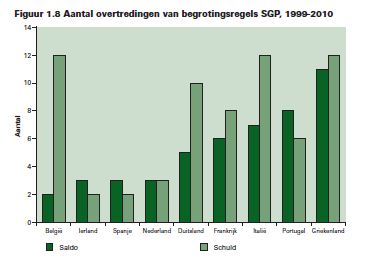 Posted by Reinoud Linschoten at 1:21 AM